After a relaxed week on the Thai islands, our marathon adventure turns into a sprint towards the final days of our time together as a group.  Racing for taxis and tuk tuks to the piers where we catch our boat back to the mainland we then jump into in to mini vans towards the Thai – Malaysia border.

First stop in Malaysia is Georgetown, Penang. It was also Jo’s birthday and even though we managed to arrange a birthday cake for our arrival at the hotel everyone was tired, particularly Jo who we had to con out of bed in order to blow out her candles, so plans were made to celebrate the next evening.

While crew arrange onward travel to the Perhentian Islands, the rest of the group have a full day to explore this old colonial town and the Penang Heritage trail.  The clan jetties where old Chinese clans settled in waterfront houses were a must see as well as a trip to KOMTAR tower for a great 360 view of the city.  Armenian Street for colonial architecture and modern street art and Fort Cornwallis, the site where the founder of Penang, Captain Francis Light first landed as well as great markets and shopping malls for those less interested in history. 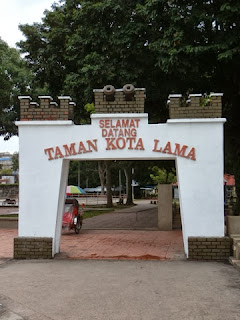 We celebrate Jo’s birthday with drinks bought from the 7-11 on the rooftop of the hotel. We were restrained in our consumption for a couple of reasons, alcohol is expensive in Malaysia, and with an estimated drive of anywhere between 4 – 10 hours, according to various people we had spoke to, we have a very early start the next morning.

A comfortable bus with armchair-like seats, a great driver and a magnificent destination at the end make this journey quite pleasant, but it was about to get more interesting once we arrived in Kuala Besut.  This is where we leave our beautiful bus and wait for our next mode of transport, speedboat. Our chilled out journey was about to turn in to a thrilling ride not that any of us were really prepared for it as we piled in to the boats.  As soon as they hit the open water both yamaha engines were opened up and we bounced our way at high speed toward the tranquil island and our Reef Chalets.

Snorkelling and diving are two of the best things to do while here if all the relaxing on your own private beach gets too much for you.  Taking a boat out to the best reefs for seeing fish and turtles were arranged through the chalets, or you could walk down the beach with a hired mask and find your own sea life hiding in the grass and near the rocks.  It was also a great opportunity for diving, which Andy, Spike and Phil - who got his PADI certificate during Beach Week, spent most of their time doing. 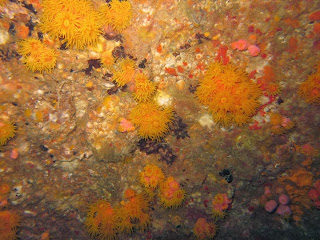 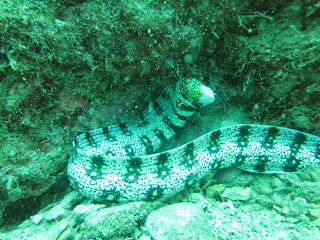 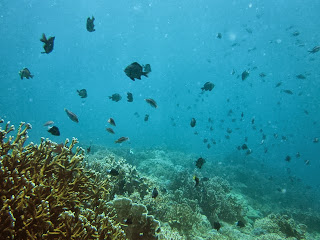 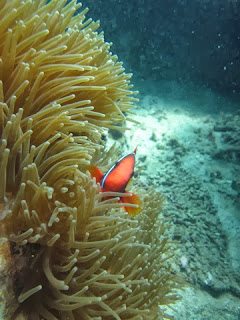 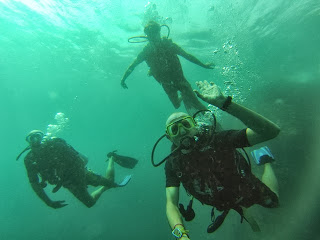 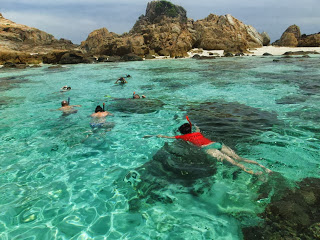 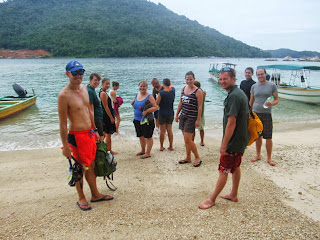 Our days on the island are long, hot and sunny, the nights are dramatic.  As soon as the sun starts to set the wind picks up, the low loud rumble of thunder is heard and before long, monsoonal rain hammers down, making our choice of restaurant easy, going for the only one on the island that has shutters to stop the wind blowing away your dinner.

Three nights in paradise and we are back on speedboats and onwards to Kuala Lumpur, our penultimate destination.  A bustling, sprawling city where you can buy cheap electronics from the ubiquitous malls, visit the Petronus Towers, buy cheap watches from China Town and get a little taste for India in Little India.  It is also where we say goodbye to Louise, Rebecca, Fiona and Al as they leave the group here to continue their travels to Borneo, Sumatra and the Philippines.

We all rendez-vous in the Reggae Bar where the ladies got to drink cheap spirits and mixers and in turn had to visit the bar to buy the cheap drinks for the boys.

Nursing sore heads the next day we leave for Singapore!  Our final border crossing goes incredibly smooth, until one of the bottles of wine that was given as a gift to crew stalled the process.  Being taken away to one side and waiting as sheets of paper were written on and photocopied, customs officials whispering to each other was quite unnerving, and incredibly frustrating as it was the final crossing!  It was only after what felt like forever that the final custom official realized that the bottle had been opened and was therefore classed as consumed and didn’t require any tax to be paid on it, phew!
Getting through to the other side and I see that our bus has not arrived.  It was another classic three-way miscommunication between crew, the guy we arranged the bus through and the bus driver. Many phone calls are made and our original driver who thought he was leaving us at the border and not taking us all the way to our hotel turns around and drives back to pick us up and take us to our Singapore hotel.

Arriving at our hotel and taking orders from our militant hotel receptionist we get checked in and plan to meet at 7 for our final group activity, a Singapore Sling at Raffles.

It is here that we get to reflect on the amazing journey we have embarked on.  17 countries, 26,000+ km and 26 weeks all leading to this moment and the last time we are in the same room together as a group.  We are soon to go our separate ways, either on to Australia, New Zealand, Borneo, and for crew, back home.

Signing up for a trip like this is the easy part, going the distance is the challenge.  I’d like to raise a toast to everyone who was brave enough for the challenge and courageous enough to embark on a trip of a lifetime.  You are incredible people who I am grateful to have had the pleasure of meeting and calling my friends and for making being on the road feel like home.  Cheers!

Beaches, ruins and harrowing history - travels in Cambodia and Thailand

Leaving Vietnam was another interesting border crossing where my British sensibilities are put to the test again with the lack of queuing and people pushing in with passports stuffed with money and then thrown towards the one immigration official on duty.  If everyone had just queued we would have all got through a lot quicker, I believe, but anyway, we got through eventually and the Cambodia side was a breeze!

Our first destination is Phnom Penh, where we are all aware of the political protests that are occurring in the city.  Undeterred by what could be inflated media attention and reporting we head to the city regardless.  The only inconvenience was the closed road that meant we had to walk the last couple hundred metres to our hotel and the delivery of ice had been delayed making cocktail happy hour void.  There was a sense of unrest in the area, made quite obvious by the teems of riot police that were outside the Foreign Correspondents club on the first night, but we saw no protests or violence during our time there.


Most commonly known as the Killing Fields, Cheung Ek Genocidal Centre was the first of our group tour activities.  We had warned the group that it was going to be a hard day but like museums we have seen previously there is never anything to prepare you for the experience you get.  A totally immersive experience you walk around the site wearing headphones and listening to a survivor from the fields talk about his experiences and describing in grisly detail the horrific travesties that occurred here only 30 odd years ago under the Khmer Rouge regime. 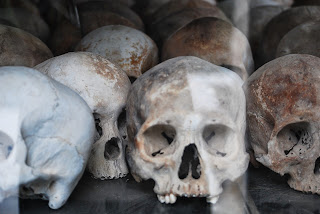 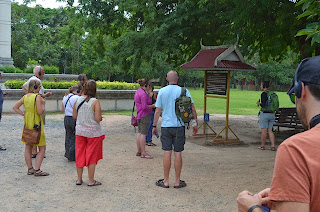 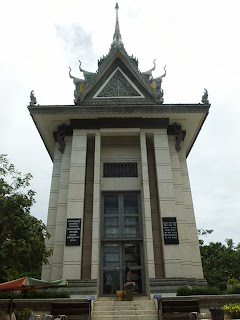 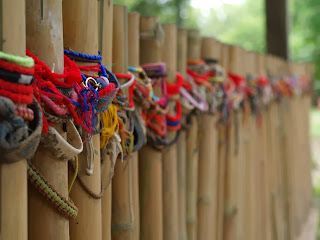 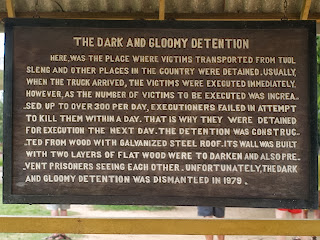 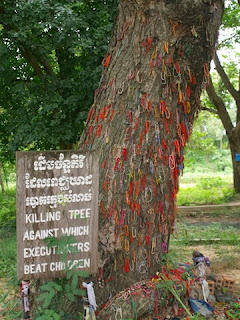 The next tour is of Tuol Sleng Museum, otherwise known as S-21, an old school commandeered by the Khmer Rouge and used as a prison to torture thousands of innocent people into false confessions of working for the CIA. 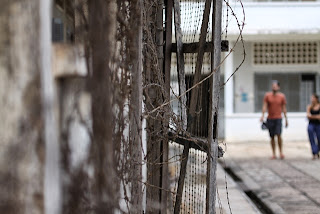 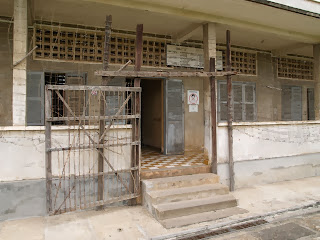 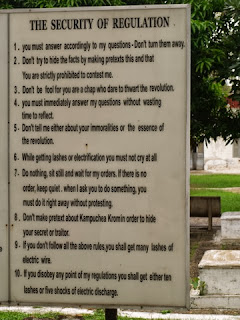 Our guide around the site was a local lady who was 13 at the time of the Khmer Rouge regime, it was heartbreaking to listen to her account of her childhood and how she had to leave her home and work in the rice fields.  She also explained what happened in the old school rooms, some converted into 2m x 1m cells in large rooms where prisoners would be shackled to long bars in rows. The photos taken of every person that passed through the prison were the most haunting.  Mug shots taken by the Khmer Rouge staring out from the display boards, some looking scared some shell shocked and some defiant.
A drink in the Foreign Correspondents Club was the next destination for some of the group.  A much needed cold beverage to sip while we discussed what we had seen and heard earlier in the day, we also wanted to get there before the riot police ruined the ambiance.

On to the Golden Banana in Siem Reap. A lovely hotel with a swimming pool, although we didn’t think we would have time to use it as we had so much planned to do there.

First things first was a sunrise trip out to Angkor Wat.  We left our cosy beds at 4:30 AM and didn’t leave the temple complex till almost 1pm.  Unfortunately the sunrise was disappointing with the sky clouded over, but it was still a spectacular sight to have this stunning temple slowly revealed to you in the blue hazy light of dawn.  Our convoy of tuk tuks took us around many temple complexes including Angkor Thom and the Bayon Temple, the Elephant Terrace and Ta Prohm, famous for Angelina Jolie running around it in the Tomb Raider movie.  The downpour of rain didn’t stop the snapping of photos whilst here as the ancient stone temples being wrapped and slowly overtaken by the roots of trees is magnificent. 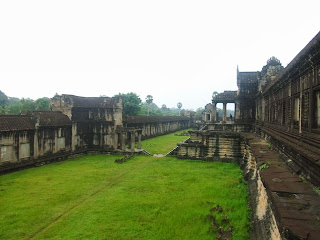 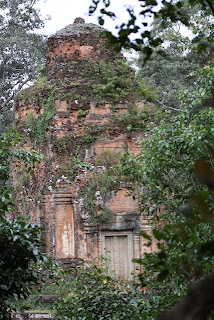 Once we finished our tour some people went on to the markets for food, other back to the hotel for a rest and some to a nearby land mine museum that was set up by a local man. As a boy of 13 he fought for the Khmer Rouge and placed land mines. By the age of 14 he defected to the Vietnamese army and once the country had stabilized he felt the need to make his country safe and free of unexploded ordnance, whether it was bombs dropped by the Americans during the Vietnam conflict or mines that he could have placed himself.  Proceeds from the Museum help support children who have been orphaned and injured buy mines.

Our time in Vietnam and Cambodia was both exhausting and heartbreaking, but they have the favourite countries for many people in the group.  The people in both countries have been incredibly friendly and so welcoming it is hard to believe they are still recovering from the devastating effects war have had on their spirits and countryside.

From Siem Reap, Cambodia we returned to Bangkok, Thailand.  A great opportunity for the group to fit in the sight seeing they didn’t have time to do last time we were here and also post more brimming parcels home.  The floating markets were on a lot of to do lists as well as the Calypso Lady Boy show! 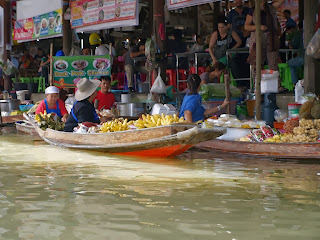 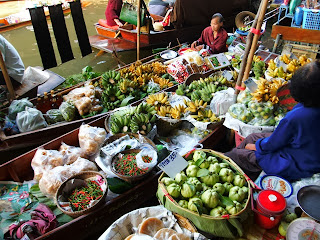 We also say good bye to Kelly and Hayden as they head of to search Sumatra for Orangutans – Good Luck guys!

And now we head to Beach Week, for some, the most anticipated week of the trip so far.  Which island you stay on is up to you; Ko Phangan or Ko Samui or  Ko Tao, they are all fabulous islands ideal for getting your PADI certificate, sunbathing, shopping, eating at local markets, drinking happy hour cocktails, kayaking, scuba diving, hiking or simply chilling.  You can do as much or as little as you want, just don’t miss the boat! 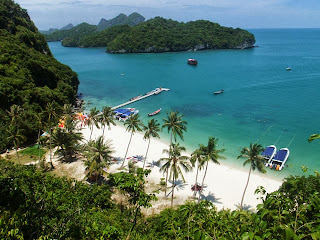 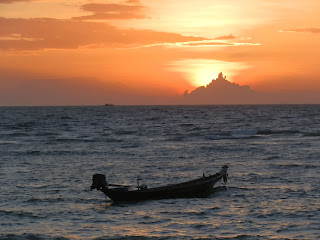